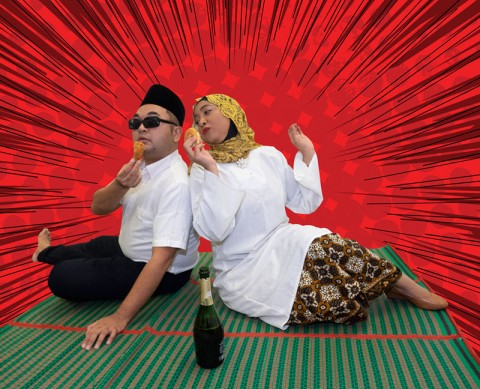 Stepping into ANGKAT is like entering another world that seems almost close to home, but not quite. A couple leisurely glides along in a sampan, a man fishes while standing on top of a stool, and a child sits under an umbrella. The backdrop is lit in a luminous purple colour, bathing the cast with a twilight glow. As such, the world of ANGKAT submerges the familiar with the imaginative. Playing with fact and fiction, ANGKAT’s take on the Singapore story is definitive, maybe.

ANGKAT tells the story of Salma, an adopted child who is also an aspiring singer, and the story of Mak, a former islander, who is searching for her home. These two characters touch upon issues of identity, whether it boils down to your roots or the way you speak. The intertwining tales are not necessarily linked to each other, nor do they move in parallel with each other. Rather, the dual plots mirror the many pairs of juxtaposing elements that ANGKAT wrestles with.

ANGKAT is abundant with foils and contrasts. At the center of a stage sits a dining table set that faces an old television. ANGKAT playfully conforms and subverts this scene of domesticity. Characters talk to each other through the television set, for instance. The private sphere becomes a terrain for characters to play and even to replay scenes.

The blending of such polarising facets positions ANGKAT as a play not about extremities, but rather as an alternative, absurdist performance. ANGKAT is drenched in local relevance, and with a cheeky grin, it morphs into a mythical rendition of something else…while not forgetting its lion roots, of course.

This review is based on the performance on 26 January 2019. Part of M1 Singapore Fringe Festival, ANGKAT: A Definitive, Alternative, Reclaimed Narrative of a Native ran from 24-26 January at Esplanade Theatre Studio.