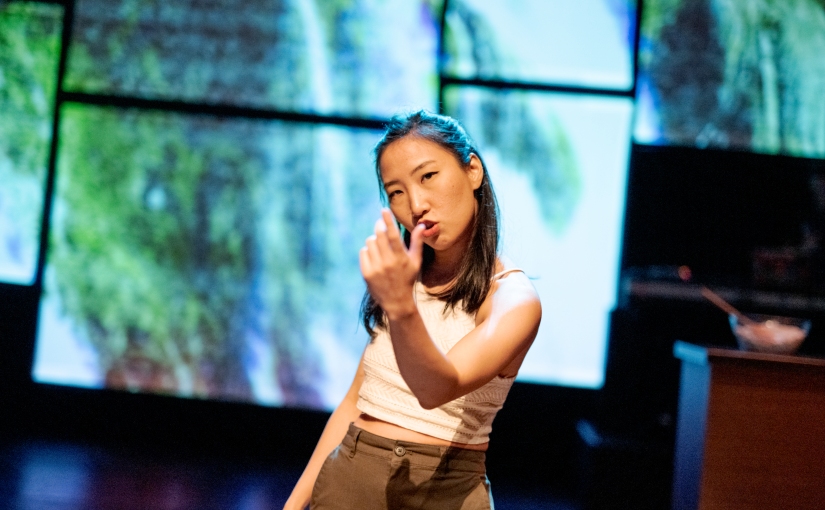 Beside Ourselves marks local electronic duo .gif’s theatrical debut. Part live music and part narrative performance, Beside Ourselves plays out like a live concept album on stage. It opens with a quietly daring question: Where do we go when we are beside ourselves?

Written by one half of local electronic duo .gif’s Weish (Chew Wei Shan), the stories of Beside Ourselves feels personal, as though told or re-told by a friend of a friend. Weish is joined by Isabella Chiam and Sharda Harrison on stage, and there is a certain closeness as the trio engage in conversations about men, dysphoria and tales about Yishun. In particular, one standout story is about meeting a techno Ah Beng’s “snake” –  using a towel for a python, the creature wraps itself around Weish. As her entrapment unfolds on stage, she starts to sing, evoking a delightfully weird rapture.

Weish’s wry vocals is backed by .gif’s other half Nurudin Sadali’s live mixes. Beside Ourselves features unreleased music from the pair, but the new tracks do not stray too far from their signature dark, slow beats. The live music is where Weish truly shines – this is her terrain. When singing songs about melancholia and absence, she does not shy away from her vulnerabilities. Her boldness is undoubtedly alluring.

Where Besides Ourselves struggles in is tying all these ideas of loss, displacement and identity together. The live music is placed distinctly between the scenes, rather than as part of the scene itself.  The fragmented nature of Beside Ourselves makes it difficult to comprehend what really binds the music and its loose narrative. Where do we go when we are beside ourselves? Not here.

This review is based on the performance on 10 January 2020. Part of the M1 Fringe Festival, Beside Ourselves by .gif (Singapore) ran from 10-11 January 2020 at Esplanade Recital Studio.

One thought on “On me, you, and me: “Beside ourselves” review”