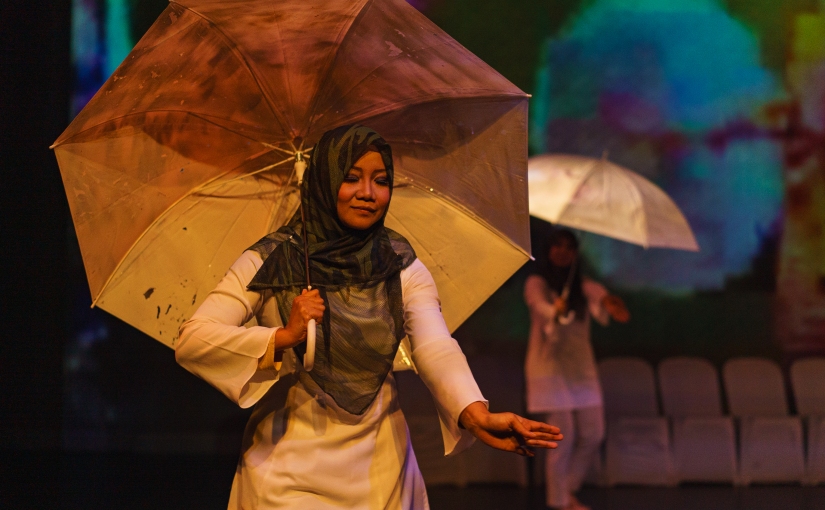 Bhumi Collective’s Mak Mak Menari tells the story of a traditional Malay dance troupe, as named in the title. “Mak mak” which translates to “mum” and “menari” meaning “dancer” in Bahasa Melayu aptly describes the group of ex-dancers, working mothers and homemakers. Their story is charmingly told; a loving tribute to dance and these Malay women.

Mak Mak Menari begins with choreographer and arts educator Soultari Amin Farid introducing the troupe and his first encounter with them. It is unusual to begin a performance about dance and women, being told by a solo male narrator, while the women dancers are mute for a good while. Though, this gradually shifts as Solutari makes way for the troupe to voice their experiences. Alongside applied theatre practitioner Grace Lee-Khoo, Solutari brings his academic experience as a dance researcher by framing the production through a quietly ambitious lens: the loaded connotations of brown female bodies. Their physicality is an extension of their identity, and Singapore history. This is effectively told for instance, when a dance member confesses to feeling guilty to dance while away from her family, through voiceover as the women dance.

Mak Mak Menari is told through different creative forms – like the podcast interview, the chatty talk show, or video interviews. There are both stylised live dance sequences and pre-recorded video projection of the troupe moving in slow-motion.  The various formats call for narrative and tonal shifts that are captivating and creative but also, imbalanced at times.

Lastly, the build up throughout Mak Mak Menari results in its climatic finish, where we finally see the troupe dance. They move gracefully and assuredly, and having made aware of their past experiences that accumulates to the dance finale – and it is an absolute treat.

This review is based on the performance on 17 January 2020. Part of the M1 Fringe Festival, Mak Mak Menari ran from 17-19 January 2020 at NAFA Studio Theatre.